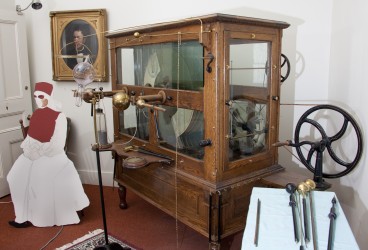 The subject of scientific investigation for centuries, the applications for electricity in medicine grew in the late 19th century.  This Waite & Bartlett electrostatic generator is also known as a Wimshurst machine after its British inventor James Wimshurst who developed the technology in the early 1880s. Electrostatic generators produce high voltages, but low currents and were one of the first sources of electricity used in modern medicine.

The characteristic feature of these machines is the glass disks laminated with metal sheets arranged on a single axle. An operator cranked an external fly wheel to rotate the disks which produced the electrostatic charge.  In electrotherapeutic treatments, wooden and metal electrode wands were used to direct the electrical charge from the machine to various parts of a patient’s body.  Electrotherapy was characteristically used to treat rheumatoid arthritis, gout, skin conditions, neuromuscular dysfunction, and blood circulation. The effectiveness of these treatments was considered dubious by detractors, but advocates described marvelous medical applications.  Electrostatic generators were also employed as a power source for X-ray tubes.

This machine was purchased by Dr. Frank Mellow, who completed medicine at Queen’s University in 1902.  It is believed he began to use the electrostatic generator around 1912 at his Uxbridge, Ontario home office for radiotherapy, massage, surgical procedures.  The machine was last used therapeutically in 1940.