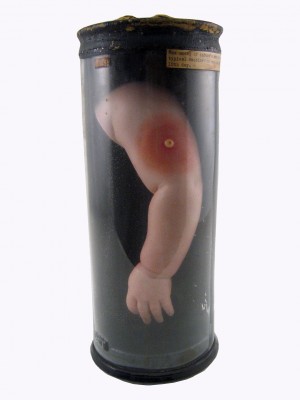 Wax models (moulages) were important clinical teaching tools in many European and North American hospitals well into the 1940s.  Joseph Towne (1806 –1879) was a British moulageur and sculptor who is best known for the creation of wax anatomical models, many of which still survive today and are on display in the Guy’s Hospital medical school museum. For 53 years, he was the hospital’s anatomical model-maker – living and working in the basement where he produced compellingly lifelike wax models of the dissected, diseased corpses of former patients. He made more than 1,000 wax specimens, some of which are still used for teaching today.  Towne guarded his methods jealously, especially his technique for applying colour to wax. The Royal Society of Arts awarded him several prizes for his work.

This particular moulage of an infant’s arm showing a typical vesicle on the tenth day after vaccination was likely brought to Canadaby Dr. James Miller.  In 1920 Dr. Miller moved from the Universityof Edinburghto head the pathology department at Queen’s University, Kingston.  An excellent educator, his textbook, Practical Pathology; Morbid Anatomy and Post-Mortem Technique (first edition 1914) was a recognised resource.  During Dr. Miller’s tenure at Queen’s, the department housed a large museum of pathological specimens for teaching students.