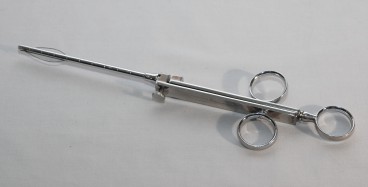 First undertaken in 1935 by Portuguese neuropsychiatrist Dr. Antonio Egas Moniz, leucotomy involves the removal of brain tissue from the pre-frontal lobe in order to treat psychoses.  His initial approach was improved upon with the use of a leucotome, invented by Canadian neurosurgeon Dr. Kenneth G. McKenzie in the 1940s.  The leucotome is inserted into the brain through a hole made in the skull.  Then, the plunger is depressed to extend two wires to either side of the tip.  The leucotome is rotated to cut away cores of brain tissue.  Moniz reported significant improvements in 35% of his test cases and slight improvements in another 35%.  Although there was much criticism from his peers, leucotomy was adopted in many countries.

In the U.S., neurologist Dr. Walter Freeman and neurosurgeon Dr. James Watts pioneered new psychosurgical treatments, modifying leucotomy into transorbital lobotomy.  Recommended for patients with severe anxiety, agitation, depression, and schizophrenia, lobotomy was considered for virtually every patient for whom no other effective treatment could be found.  Some patients did find relief to their psychological symptoms; however, others experienced severe side effects including decreased attention span, disinhibition, changes to personality, and unresponsiveness.

Leucotomy and lobotomy were very popular in the 1940s and 1950s because they enabled many patients to leave asylums, improving their quality of life comparatively and lowering the societal cost of institutional care.  The introduction of pharmacotherapies in the 1950s led to the decline of leucotomies and lobotomies, and these were generally discontinued by 1970.