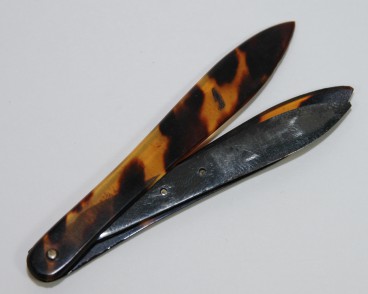 Seton needles first became popular in the 15th century as a means of producing counter-irritation.  This approach to medical treatment believes that the creation of a superficial irritation on the body, through such means as cupping, blistering, or the use of seton needles, will distract the body from other irritations, reducing the primary sensation of pain and enabling the body to heal.

Irritation is produced when the seton is passed through the skin and underlying tissues, drawing with it a bristle or silk suture laced through the proximal eye of the needle.  (The name seton derives from the word seta meaning bristle).  Such threads were left protruding from the puncture and exit sites.  They were moved back and forth daily to irritate the area and cause the discharge of purulent matter.

The seton needle depicted here is flat, a style that developed in the late 18th century.  It is protected by two tortoiseshell leaves.

The use of seton needles fell out of favour by the late 1870s, likely in connection with the increased acceptance of germ theory.